If you love animals, it might be time to look at some hard truths behind the spotlight of the circus – as hard as that may be. The treatment of circus animals has been investigated by world animal rights organizations for the past several decades and the stories of abuse and cruelty are abundant. Many popular organizations have been regularly cited for cruelty, poor conditions, and other offenses. Experts will tell you that wild animals fear fire, don’t stand on their hind legs, and certainly don’t ride bikes. They state that it takes a lot of abuse, fear, and confinement to create that unnatural behavior.    Not all circuses resort to cruel practices, but by and large, there are few that consider circus animal rights. The evidence of abuse can be seen in incidents where circus animals went on rampages after years of abuse, attacked the public, and tried to injure themselves to escape a life of misery. Animal rights organizations have undercover video and first-hand accounts of circus animal controversies where animals were kicked, punched, restrained, and emotionally abused in order to illicit a performance, or sometimes for no reason whatsoever.

The Humane Society’s message about the use of circus animals is clear. “With so many better choices in entertainment, there’s no need to use wild animals. If you see a captive animal being treated cruelly, speak up. You can also support stronger laws to protect wild animals. And use your pocketbook to advocate for alternatives such as animatronics in films and animal-free circuses.”

Circus Animals Are Not Designed to Live This Life

Animals need to exercise, socialize, forage for their own food, migrate with the seasons, and establish territory. Depriving animals such as tigers and elephants of this natural behavior is considered cruel and dangerous according to organizations such as PETA, Born Free USA, The Humane Society, Animal Aid, and PAWS.

Circuses Are Regularly Cited by the USDA and Other Authorities

Every major animal circus has been cited for violating “minimal standards of care” established by the United States Animal Welfare Act, overseen by the USDA. Even though PETA, the Humane Society, and other animal rights organizations report abuse of circus animals, very few violators are prosecuted. They usually only pay fines.
There is some hope, though. Many communities have signed petitions banning circuses that use abuse to train animals.
Related Posts  The Cutest Half-Shaved Cats on the Internet

Once Animals Outlive Their Usefulness, They May Have No Place to Go

After an animal has grown too old or sick to perform in the circus, there may be no safe refuge for them. Many animals are left to suffer or put down. Mexico banned tigers, zebras, lions, elephants, and other exotic animals from circuses in 2015. Approximately 3,500 animals were freed, but organizations struggled to find homes for all of the animals. Some were sold to prevent the government from taking them, some were housed by animals rights organizations, and some were taken in by government programs.

During the off-season, animals are often kept in confinement in small cages or traveling crates, leading to psychological issues and often physical ailments. A common side effect of perpetual confinement is swaying and pacing.
According to PAWS, “virtually 96% of their lives are spent in chains or cages.” Around 11 months a year, animals travel across the country in box cars with no climate control; eating, sleeping, and defecating in the same cage. Some spend as many as 26 hours straight in their travel crates during a show and as long as 60 to 100 hours at a time when the circus travels.

Severely Damaged Animals May Lash Out, Endangering Themselves and the Public 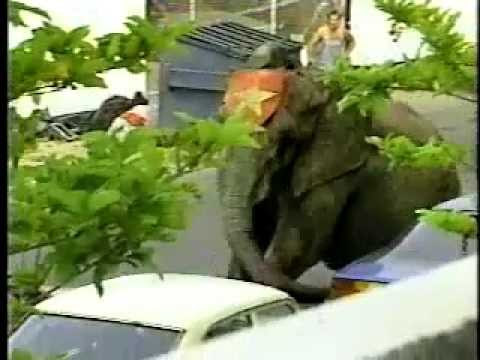 v
Since the ‘90s, there have been over 100 documented human injuries from circus animals all over the world, resulting in 13 fatalities.

Some Trainers Use Muzzles, Electric Shock, Bullhooks, Whips, and Fear to Control Behavior

According to many experts and animal rights organizations, animals do not perform tricks out of love or because they enjoy it. “While circus promoters claim that trainers use only positive reinforcement, or rewards, reports prove otherwise. Circus training methods include beating animals with clubs and other objects and depriving them of food. Trainers sometimes strike elephants with sharpened hooks, which can result in physical injury. Trainers resort to brutal methods to try to maintain a position of dominance,” The Humane Society has stated.

Laws Do Not Protect Circus Animals

The Humane Society states this as fact: “While standards for handling, care, treatment, and transport are written into the federal Animal Welfare Act (administered by the U.S. Department of Agriculture), those standards are minimal and poorly enforced. Penalties are weak, and even persistent violators are rarely prosecuted.”

Taken from the wild, baby elephants are automatically put in an unnatural state, not being allowed to properly develop socially. After training, they are sometimes sold to new owners again and again, who have different methods of training, forcing the animal to relearn and readapt to an already unnatural state of being: performing tricks.

Some Circuses Are So Bad, Many Countries Have Banned Wild Animal Shows

In a case that dragged on for a decade, the ASPCA agreed to pay Ringling Brothers $9.3 million for alleging that the circus abused their elephants. “Animal activists have been attacking our family, our company, and our employees for decades because they oppose animals in circuses,” Kenneth Feld, chairman and chief executive officer of Feld Entertainment, said. “This settlement is a vindication not just for the company but also for the dedicated men and women who spend their lives working and caring for all the animals with Ringling Bros.”

Circuses Are Not Required to Conserve Biodiversity

Nor are they required to educate the public about wild animals, the circus’s practices, or aspects about the animal’s training.

Many Animals Move from Circus to Circus

According to the Humane Society of the United States, it’s a never ending life of misery for these animals.“Many circus animals are leased seasonally from dealers. The animals move from circus to circus, following seasonal contracts. Many circuses don’t bother to provide regular, competent veterinary care. Animals who aren’t obedient or who have grown too old to perform may be sold or given to zoos, roadside attractions, research laboratories, or private individuals—options unlikely to improve their quality of life.”

Ringling Brothers Circus Is Phasing Out Its Elephants

Ringling Bros. and Barnum & Bailey  announced in 2015 that elephants would be retired from the show by 2018. Since that announcement, the group has stepped up the retirement deadline due to the work of staff to make it possible. The 11 female elephants will join 29 other elephants at Ringling’s 200-acre Center for Elephant Conservation in Florida. Tigers, lions, dogs, camels, horses, and kangaroos will continue to be used.

previousThe 26 Creepiest Real Pictures of Ghosts
next10 Memes of the day for Monday, 08 October 2018
Tags:AnimalsWeird Facts