7 Mythical Creatures That Were Found in Real Life

Some people will believe anything, and there’s no shortage of people in the world willing to make a quick buck from the gullible. What follows is a collection of people who believed in all sorts of mythical creatures– and in some cases, the evil bastards who exploited those people for money.


A man in Guadalajara, Mexico was picking guavas from a tree when he saw a glimmer amongst the leaves. He reached out and grabbed the object that caught his attention and realized that it was a fairy. Like any rational person, he stored it in a jar of formaldehyde–as you do–and put it on display for the whole town to see.
More than 3,000 people waited in line for hours and paid the equivalent of $1.60 to get a look at the fairy.
What Really Happened:
First of all, look at this thing: Several local skeptics (and there are quite a few of them) have pointed out that it looks very similar to a popular toy. I don’t want to insinuate that this down-on-his-luck, unemployed bricklayer stuck a toy in a jar of formaldehyde and charged people to see it just to make a quick buck, but his “fairy” more closely resembles an action figure than anything that has ever been alive. Unless you’re counting Toy Story. And let’s be honest. Who isn’t?
Again, more than 3,000 people wanted so desperately to believe this story that they paid him $1.60 to get a look. And the guy was unemployed. Let’s put the pieces of the puzzle together here, people. There really isn’t a lot to go on here. A picture has surfaced from China of a man who appears to be gutting his dragon while his dog plays with its tail. It’s also not known if the man is planning on eating the dragon, or if the dog knows that he’s the second course of the meal.
What Really Happened:
There are really only two possibilities here. The image is either photoshopped or he’s holding a dragon toy. The dog is playing with the thing’s tail, so it probably wasn’t completely photoshopped in. The most likely explanation is that the man is really holding a snake. Seriously, mentally subtract all of the dragon parts from the image, and what you’re left with is a snake.
It’s possible that someone photoshopped in the dragon bits or that the man attached them to the snake himself and then painted it, or someone altered its color using Photoshop. Hell, you could do that with a handful of colored Sharpies.
This one is kind of sad though because, real or not, it’s hard to stop picturing a dead Mushu from Mulan after seeing that.

The Story:
Alaskan police arrived at the scene of a beating one evening to find a man writing on the ground in pain and screaming. A few people were running away from the scene. When asked what happened, the man told police that a group of leprechauns had beat him up because they were mad at him for dancing with a girl.
You can’t make this stuff up.
He was taken to the hospital and treated for the cuts and bruises all over his body (whether the wounds were inflicted by a shillelagh remains to be seen). The police never did find the leprechauns or their pot of gold, for that matter. They’re probably off terrorizing other townsfolk as we speak.
What Really Happened:
He got beaten to the point of hallucinating little green men. An eyewitness said that a group of people, normal, regular-sized people, beat him up and ran off.
The man, who had been beaten within an inch of his life, was probably dazed from the flurry of punches to his head. He was also likely very, very drunk. As for the girl that he was dancing with, perhaps he tried to dance with another man’s girlfriend, prompting a beating from the boyfriend and his friends. (Note: His friends were short, green, and fond of dancing jigs).
And what makes more sense: a roving band of violent leprechauns, or some drunk guy getting too handsy with someone else’s girl?
Plus, it was nighttime. There can’t be any rainbows at night, and everyone knows that you can’t find leprechauns without rainbows. Sheesh.
And of course, as a bonus, there was this incident: A while back, this video of a dead mermaid washed up on the beach made its rounds on the Internet:
The camera man is silent, and just sweeps along the beach until he comes across the mermaid corpse. And despite her looking a bit like Skeletor and her mannequin-like appearance, it’s pretty convincing. I mean she’s dead–right? Rigor mortis, man.
What Really Happened:
Let’s just ignore that anything that died in that position would have fallen face first into the sand instead of freezing in place.
It’s totally real…sort of. Everything you see there is an actual dead thing of some kind. It’s just not a mermaid. It’s just one of the many macabre sculptures made by Juan Cabana. Sculptures that he makes using real dead fish, human skeletons, etc. He’s like a modern day Dr. Frankenstein but without the lightning, angry mobs, or windmills.
And that image of a mermaid up there? You’ll find that very same image on his site under the “for sale” section. That particular sculpture, called “Nerina” actually sold for $10,000.
So there you have it. Mermaids aren’t real, but Dr. Frankenstein is. And he’s filthy, stinking rich. Time to go rob some graves. Cha- ching!

The Story:
You’ve heard them all before. There’s a veritable mountain of cyclopes littered throughout mythology, from getting their eyes jabbed by Odysseus to Hercules uppercutting them to the moon to the new God of War games, where Kratos tears out their eyes by the dozen. The point is, cyclopes are everywhere, and the ancient Greeks are to blame. In fact, it was them who unearthed the first cyclops skulls: What Really Happened:
Except they were way off the mark.
Those skulls that spawned the very myth of the one-eyed giants weren’t cyclops skulls at all. They belonged to an ancient elephant-like species known as Deinotherium giganteum, and it looked like this: 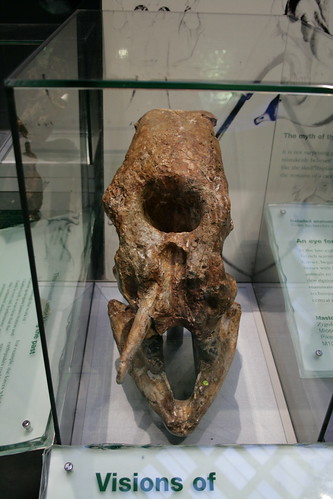 The “eye socket” in its skull is really where the trunk was, and it’s hard to imagine something so silly looking being the reason that myths about the cyclops first started. Just because some ancient Greeks couldn’t tell what elephant skulls were and mistook them for the heads of one eyed giants.

The Story:
A Texan man who was working on a golf course stumbled across a dead animal near the woods that many people believe to be the chupacabra. It’s quite clearly not a coyote or dog and doesn’t resemble any raccoon they’ve ever seen before.

Though it bears a striking resemblance to those rats from Fallout.The man’s wife wouldn’t let him keep it in the freezer, which is apparently something he wanted to do, so he gave it to Center for Animal Research and Education, in hopes that they could figure out what the hell the thing was.
What Really Happened:
It’s totally just a hairless raccoon. Jennifer Barrow, a wildlife biologist said, “the feet, skull and dental formation all matched a raccoon,” though she didn’t have any idea why it was hairless, and just referred to it as an “anomaly.”
We wonder how the news could have had such a field day with this though. Anyone with half a brain can see that this tiny thing wouldn’t be able to eat an entire goat all on it’s own, and eating goats is kind of what chupacabras do.
But one thing’s for sure. I’m never going to look at a raccoon the same way again. Underneath all that adorable fur lies a monster that is half giant rat, half horrid radiation sickness. And we want no part of that. No sir.

Related Posts  The Most Horrifying Defense Mechanisms of Adorable Animals

The Story:
George Edwards makes his living by giving people tours of Loch Ness in hopes of actually seeing the monster–until one day, when he totally freaking did. And he’s got the photo to prove it: Edwards saw the creature for a full ten minutes and managed to take the above snapshot, which proves once and for all the existence of the loch ness monster.
What Really Happened:
Sure, that picture could be of the monster. Or a log, twig, rock, scuttled boat, or whatever. The point is, the photo isn’t very clear. And Edwards claims to have seen the monster for a full ten minutes, so why does he only have one (very nondescript) picture? According to that expert (and plain old common sense) wouldn’t that be more than enough time to take hundreds of photos?
But what does he stand to gain by lying? It’s not like the man’s income depends on people believing in the monster, and paying Edwards to take them on monster tours of the lake.
Oh wait.
God, that sounds like the motivation of half of the villains in Scooby Doo. And he would have gotten away with it too, if not for you meddling news crews and your pesky “experts.”

previousEverything You Need to Know Before Going Through Airport Security
nextEvery Person Who Has Been Immortalized in a Google Doodle
Tags:AmazingWeird HistoryWeird Pictures