Since Pokemon Go’s release, we’ve heard nothing but horror stories about people finding dead bodies and getting mugged while trying to catch a Bulbasaur. But for every sticky situation that Pokemon trainers finds themselves in, there are ten more positive Pokemon Go stories. From patients at a children’s hospital getting to do something fun to helping autistic people communicate, these stories are truly good things coming from Pokemon Go.

For every alleged negative effect of hunting Pokemon on your phone, there are so many more Pokemon Go benefits. The stories that have been collected here show that by playing video games, people can get out of their own head for a while, get some exercise, and even have fun while the rest of the world is crumbling. Take a look at these heartwarming stories about Pokemon Go, and if chasing digital monsters around your city has made a positive impact on your life, tell us about it in the comments.

Pokemon Go Is Hooking People Up

Anyone who thinks the folks playing Pokemon Go are a bunch of sexless nerds has obviously never seen what happens after dark on an overnight theater class trip. While trying to take over a gym in Washington, D.C., in July 2016, Peregrine Teneo spotted a woman driving up the gym’s points and keeping him from taking it over. When he jokingly asked her to stop she suggested that he buy her a drink.

While hunting for Pokemon near her apartment in Orlando, FL in July 2016, Carey Burns found an injured kitten crying in a parking lot. “I just scooped her right up. She didn’t fight me or anything, she just seemed scared and hurt.” Carey named the kitten Mewtwo and thanks to the vets at Candy’s Cats, Mewtwo was able to get her fractured pelvis and dislocated hip all fixed up.

In an act of solidarity with Black Lives Matter that no one expected, the creators of Pokemon Gomemorialized the gazebo in Cleveland, OH where 12-year-old Tamir Rice was gunned down as a Pokestop. The description for the stop reads, “Community memorial for Tamir Rice, shot and killed by CPD officers who shot him in under 2s after breaking department policy regarding escalation of force.” Who needs Lawry’s when you’ve got Pokemon?

Pokemon Go Helps Autistic Boy Come Out of His Shell

Before Pokemon Go, six-year-old Ralphie Koppelman had been diagnosed as autistic and barely communicated anyone, let alone other children. But according to his mom, the day Ralphie started playing in early July 2016, he began to open up to other kids and even have conversations. “If a kid walks up to him and says ‘Hey! Want to play a game with me?’ he might squeal and flap his hands and shriek, and then want to run around in circles around them, laughing with excitement.”
Related Posts  The Absolute Weirdest Wedding Dresses Ever

While Redditor 4rrirv was out one night in July 2016 trying to hatch some of his eggs, he ended up bumping into another Pokemon Go player who happened to be a cute gal, and then after an evening of chatting about the game, he did the unthinkable: he asked her out on a date. Duh, she said yes.

Thanks to the real world applications of Pokemon Go, Redditor Elementsurvivor, a self-described 308-pound guy who rarely has reason to leave the house, has been getting outside and walking at least 10,000 steps a day since he started playing in July 2016. He finished his brief post by saying, “I want to thank Pokemon Go for changing my life and inspiring me to get up, go out see the world, get fit and lose weight.”

A Reason to Go Outside

A self-described loner, Redditor Gappajin posted in July 2016 about how Pokemon Go has gotten him out of the house after a decade of mostly staying inside and hanging out behind his computer. His description of visiting a Pokestop is inspiring even if you haven’t been in a similar position. “It felt so liberating to walk [to the Pokestop], with a sense of purpose I’ve not felt in 10 years. (That’s how long I’ve been sitting at home.) I kept walking and went to two more Pokestops. I only caught two pokemon but I loved every second of it. I smiled the entire way that I thought I’d share that with a bunch of people that I don’t know.”

Over on Reddit, Demonologies describes battling for control of a gym outside of his favorite coffee shop in July 2016 when he realized there was a kid no more than eight years old hanging out with his mom and keeping tabs on the entire fight. After winning the gym, Demonologies pulled the coolest move he could: he told the kid to see if he could win control of the gym and placed one of his weakest Pokemon as its protector. What a way to make someone’s day.

One Pokemon player over on Reddit described in July 2016 how hunting Pokemon has completely changed their outlook on getting up and going outside. “Today I must have gone over 4 miles (my legs are dying right now though). Just wanted to say I love the motivation Pokemon Go has given me to finally start exercising.” How long do you think it’s going to take before we see the first Pokemon 5K?
Related Posts  The Most WTF Birthday Party Photos Ever

Breaking Down Social Constructs With the Help of Pokemon Go

Redditor Werewolfatdawn went on a real-life Pokemon adventure in July 2016 when they met up with a group of kids from their school by accident and started checking out Pokestops. On their trip, they bumped into a group of jocks, but instead of the usual nerds vs. jocks run in, they were able to give each other tips on how to handle the Pokestops they’d each just visited. Take that, John Hughes.

In a post on R/Depression, Redditor DesiderataVix let everyone in on their newfound like of getting out in the sun and walking around the city. In July 2016 they wrote, “Tomorrow I’m going to try and run/walk ~4km. More walking I think, to do some reconnaissance around the city and find a good running route. I’m actually looking forward to it. I also hope to hatch a couple of Pokemon eggs while I’m at it.”
And even though it sounds like this particular Pokemon Go player still has a long road ahead of them, it’s cool that they were motivated to take the necessary steps in their recovery by a video game about cute Japanese monsters.

Leave it to some of the toughest guys in the world to bust a criminal while they’re participating in what might be the softest pastime known to man. While hunting Pokemon in downtown Fullerton, CA, two marines ended up helping police catch a creep who was wanted for attempted murder and was bothering families outside of a park in July 2016. After chasing down the alleged criminal, one of the Marines told a reporter, “It’s not what we were expecting our day to turn out with.” With Pokemon, it never is.

Noah Esquivel has had two different brain surgeries in 10 years. That’s more brain surgeries than most people have in 80 years. But according to Esquivel, playing Pokemon Go while recovering in July 2016 has helped him get back to who he used to be. “The first time I was here, that was one of the most scariest times of my life and so I felt like, ‘Is this how I’m gonna be forever?’ But now this time, with the Pokemon Go, it’s actually kind of helped me learn to be myself again.” Esquivel goes on to say that the best part about playing Pokemon Go is “the bonding” with his mom and dad.
Related Posts  A Comprehensive Guide To Dead Wack Packers 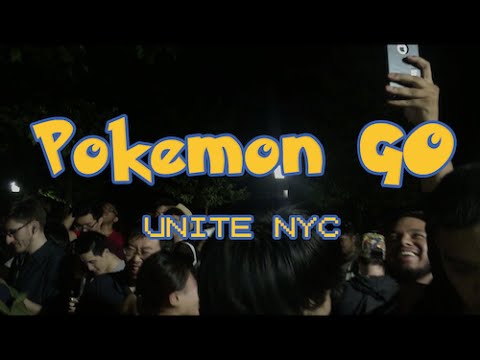 v
In early July 2016, 18-year-old filmmaker Alexander Steinberg posted a 10-minute documentary online titled Pokemon GO: Unite NYC that captures hundreds of Pokemon trainers camping the southeastern corner of Central Park and creating a community of players who are ignoring race, sexuality, age, and gender in an effort to catch ’em all.
Providing possible the most poignant moment in the short is trainer CrobinMaxxis, who explains why he still plays Pokemon. “You know my favorite part about this? Number one my brother and I used to play this as kids. He ends up passing away. He’s up there still, still, having a better f*ckin’ collection than I do. But all the violence in the world, brutality, all this f*cking racism. Look around here. You see this?” he said, pointing to the crowd. “Not a single one is the same. Everyone is having a good time. This is what the world needs now.”

One of the things that no one could have seen growing out of Pokemon Go is the hostility that would grow between the game’s factions. A group of artistically inclined players has decided to form the unofficial faction “Team Harmony” in an attempt to help everyone chill out and catch some Pokemon.

At the “hastily advertised” Pokemon Go Walk that happened in Sydney on July 10, 2016, what was meant to be a small get-together of trainers turned into a 2,000-person deep hunt for Pokemon that took players across the parks that stand adjacent to the famed Sydney Opera House. It’s pretty cool that Pokemon can bring so many people together for no other reason than to have a good time.

Our Cities Are Coming to Life

On July 13, 2016, The New York Times published a piece by Sarah Jeong about how, thanks to Pokemon Go, she’s not only been spending more time outside, but she’s been actively exploring the city and talking to more strangers than she ever would if she weren’t playing an augmented reality game. “Pokemon Go gave me new eyes with which to look at my city. It pushed me to enjoy the sunshine and fresh air, and to strike up conversations with strangers. What more could you ask for of any game – digital or otherwise?”

previous12 People Who Got Exactly What They Deserved
next18 Reasons to Fake a Pregnancy
Tags:FunnyPokemon GoViral Articles