Anyone who lives in the United States is likely to encounter someone going through what is being popularly called “Gate Rape,” the hands-on TSA search that involves touching of the hair, chest and genitals to make sure there are no bombs present. There are plenty of horror stories, but just to show the gravity of the situation, here are twelve particularly troubling stories of people being touched, held or controlled against their will while their body is touched from head to toe by government workers.
What are exasmples of TSA harassment? Take a look here and see for yourself.

Back in October of 2008, a young woman from Amarillo, Texas, was flying out of nearby Corpus Christie when she was singled out for what the TSA delightfully refers to as “extended search procedures.” After being frisked all over her body, the TSA pulled her blouse all the way down, exposing her breasts. Publicly. So that they were visible to everyone in the area.
The woman was (obviously) horrified and left the security screening area (without finishing the TSA’s check), where she was consoled by a friend. After a while, the woman reported back to the screening area, only to be mocked and laughed at by the TSA employees who had witnessed the entire thing go down. (One male employee allegedly told the woman he was sorry to have missed seeing her body, and would definitely be watching the video later. What a charmer.)
Eventually, she got through security and filed an administrative complaint. Naturally, TSA didn’t respond, sparking a sexual harassment lawsuit. (The woman was able to keep her name out of the papers at least.)
This was, of course, 2008, when the idea of the TSA actually checking out passengers naked was still considered extreme and taboo. Now, of course, this sort of thing is just part of air travel, like reading John Grisham novels or eating vacuum-sealed packages containing 3 honey roasted peanuts.
Source

Local Charlotte TV station WBTV tracked down a story in late 2010 about, yes, a six year old boy suffering a traumatizing TSA patdown at the Charlotte Douglas International Airport. (The boy’s father had written up an anonymous blog post titled “We Won’t Fly” describing the incident.)
Allegedly, a TSA female official took the six-year old boy and used the palm and finger technique on him without any warning. In the end, she groped the boy’s testicles and admonished the father for trying to comfort the boy afterwards and for protesting the pat down. Meanwhile, the boy’s mother, who was in a wheelchair, was also selected for a pat down.
(All this happened while other people went through the body scanners. This family wasn’t given a choice.)
It was so bad that the boy walked to the plane in tears and cried so hard that the flight attendants admonished the family for not keeping him quiet. Not surprisingly, they didn’t listen or take note of the situation, even when the father tried to explain it to them.
Source

A Picture Is Worth a Thousand Gropes

After getting prominent placement in the Denver Post, an image of a TSA agent bending down to grab the junk of a well-dressed passenger made the rounds in late 2010. (I’d love to reproduce the photo for you here, but don’t legally own the rights. Trust me, it’s hot.) It was probably the pained grimace on the TSA agent’s face that made the whole thing so memorable, and elevated the image to “meme” status briefly. The shot even made the rounds on morning TV shows for a few days until everyone started to feel icky and moved on.

Erin Chase, in the video above, describes her experience with the TSA and it is not a good one. Basically, the verbal warning everyone else was getting about the whole “touching breastss and genitals” thing wasn’t exactly communicated to her. She didn’t know about it until it was actually underway. (She was also traveling, bear in mind, with her baby boy.)
Everything seemed standard at first, even the part where the agent informed her she was going to feel her finger around Chase’s waistband to check for bombs. But Chase didn’t know anyone was going to feel up her breasts and her genitals. Of course, when that happened, it was so shocking that no one could really say anything for a long time and the only response was to walk away.
Later on, while boarding the plane, TSA officials showed up again at the jetty, randomly selecting people for additional pat-downs. Chase wasn’t one of them and as she passed to get on the plane, she heard officials being very specific about touching passengers in… let’s say “sensitive places.” Who are they hiring for these TSA jobs? The Woodsman?

The TSA suffered yet another round of bad PR at the hands of an ABC News producer, who posted that the ordeal was worse than “a trip to the gynecologist.” The agent she dealt with during her pat-down felt her underwear, felt the inside of her underwear and searched for an explosive device which was, of course, never found. (Though, come on, if you were going to be a terrorist, the first thing you’d do is slowly win the confidence of the ABC News organization, before strapping a bomb to your inner thigh.)
It may seem to be a recurring theme that most of these assaults happen to people working in the news and broadcasting industry, but that’s likely because they’re the few who have the ability to report on it. Imagine how many incidents with the TSA giving passengers a “bad touch” simply goes unreported and is lost to history.
Click here for the full news report
.

Pulled aside for a pat-down because of the “all-attractive-women-in-skirts-must-be-frisked policies” (sarcasm… or is it?), a Grand Rapids passenger Ella Swift’s patdown proceeded as many other women’s has – from toe to toe, all along the inside of her legs and to her crotch. (It didn’t matter that Swift volunteered to manually lift up her skirt and show her leggings underneath, making it clear nothing was strapped to her.)
In this instance, however, the agent pushes her hand up Swift’s legs so violently, it actually lifted her heels up off the ground.
Repeat: the force of the pat-down was so strong that, when the stranger’s hands shot up her leg, they shot up so quickly that she actually jumped. She later referred to her treatment as “violent and unnecessary and extremely upsetting.”
Such violent brutality sounds like it would come from a drunk man at a strip club, not in front of entire families.

Robin Kassner’s Head is Slammed on a Desk 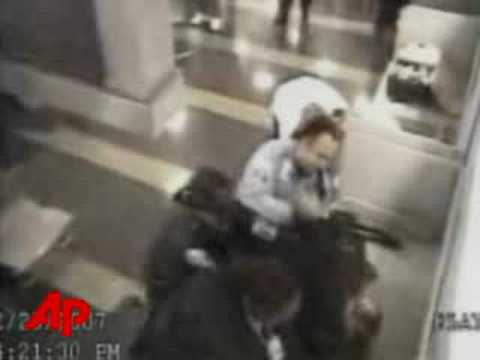 In February 2007, Robin Kassner, a marketing executive, was pulled out of the security line at Reagan National Airport for having too much contact lens solution. (She was carrying more liquids than FTA regulations allow on board a plane.)
As an official was searching Kassner’s bag, however, things took a turn for the bizarre. Two TSA agents grabbed Kassner’s bag away from her and threw her to the ground. Moments later, Kassner was lifted up by other agents, and then slammed down, hard, on a table, injuring her head. (Kassner later claimed to have suffered a concussion, which caused lingering memory problems in the ensuing months and years.)
Kassner claims to have blacked out shortly after, but video evidence revealed that she was then handcuffed, arrested and taken to a Virginia jail, where she was charged with obstruction of justice.
It’s not clear from the video what Kassner had actually done to deserve this kind of treatment. The TSA claimed that Kassner was preventing them from completing a search of her bags, and that she had become angry and uncooperative. But it’s hard to argue with the video, which shows her go from having her bag searched to being restrained and then assaulted. Kassner eventually sued the officers involved for $10 million and received a settlement

previous"Crazy" Girlfriends Tell Their Side of the Story
next15 Weird Forgotten Holidays We Should Totally Bring Back
Tags:TSAViral ArticlesWeird Facts